Founded in May 1973, right from the initial conception of the Aviation and Combined Services Lodge, it was the expressed intention of the Founders that the Lodge should provide a platform for Freemasons with a direct connection with civil aviation and, or the Services of the Crown.

This intention was clearly expressed in the prayer to the Grand Master, HRH The Duke of Kent in January 1973 as part of the process of forming the Lodge:

“The Petitioners hope that, should this prayer be favourably received, they will be enabled to tend to the Masonic needs of brethren and gentlemen who have in the past served, or are presently serving  Her Majesty Queen Elizabeth the Second, or her late respect father, His Majesty King George the Sixth in the Armed Forces of the Realm, and particularly those engaged in aviation in all its forms, especially in the Gatwick area”

As two of our 21 Founders were holders of the Distinguished Flying Cross and most were involved in civil aviation, the remit of the future Lodge was clear from the start. 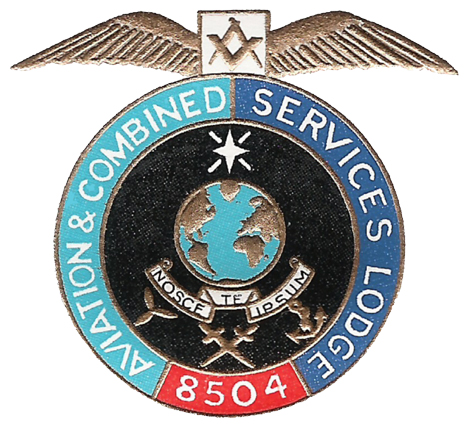 Their ambition for the Lodge has carried through the years and although we have valued members from all walks of life, the core of our membership is still found from within aviation, both on the ground and in the air, and from across the armed forces community. With current representation from former Army, Navy and Royal Air Force veterans.

Our Lodge logo represents the ambitions of the Founders.

The three bordering colours represent their armed services origins, as shown by the reversed swords, fouled anchor and stilled propellor, whilst the wings surmounting are indicative of the intended purpose of the Lodge, to serve the needs of Freemasonry in the sphere of civil aviation throughout the world, through its present and future members. they are a composite design formed from an amalgam of the pilots’ wings of seven civil airlines.

The symbols are placed beneath the Earth’s sphere to emphasise the service origins of the Founders and support of the declared aims of the Lodge.

To talk to us about becoming a Freemason and joining the Aviation and Combined Services Lodge, please complete the adjoining contact form and we will get in touch with you.

Freemasonry is one of the world’s largest and oldest non-religious and non-political fraternal and charitable organisations. It is open to people from all walks of life, regardless of their race, religion, sexual orientation or socio-economic position in society.